Lecturer in Computer Science and Artificial Intelligence, The University of Essex. 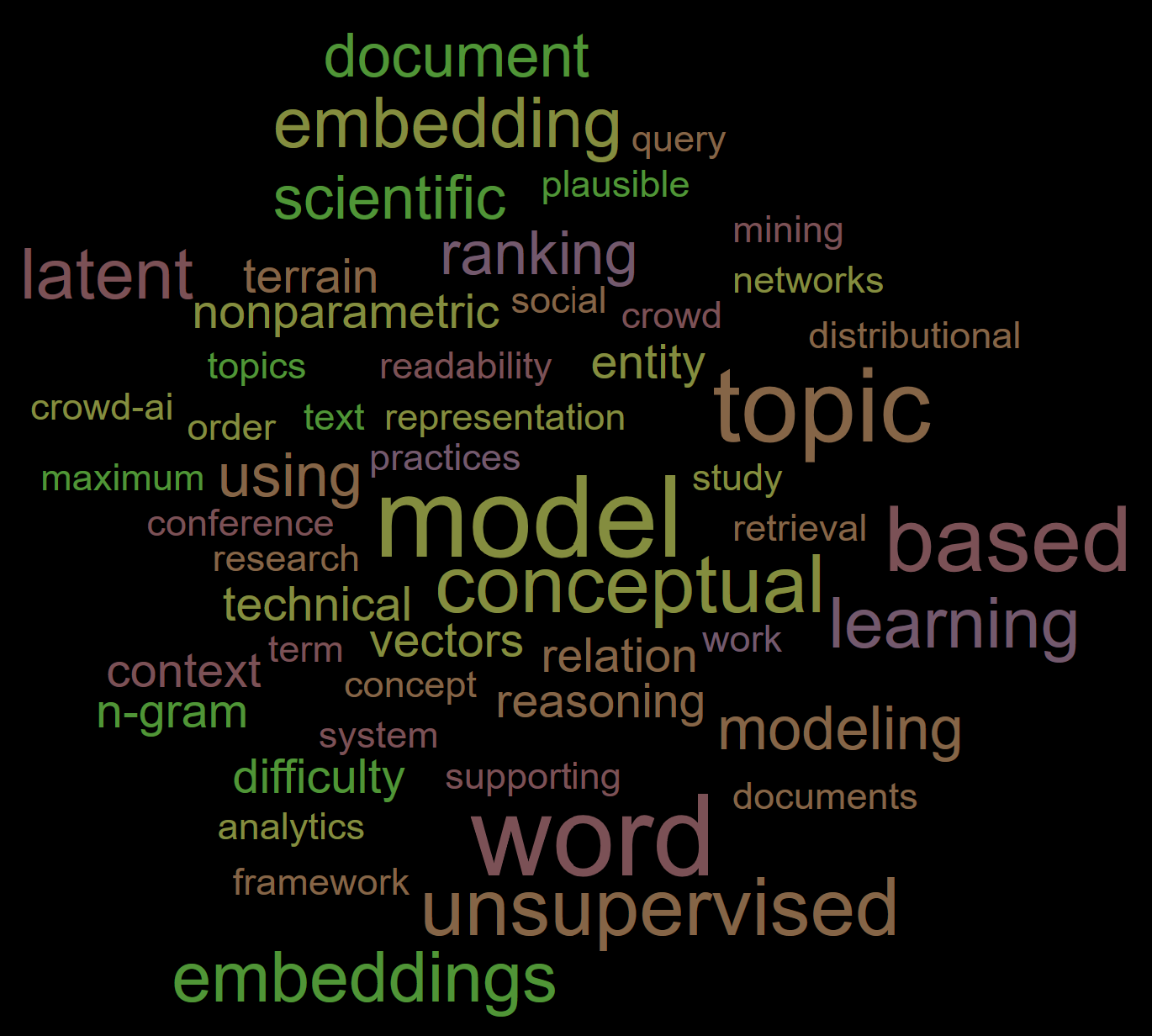 I have been working on topics in machine learning from the beginning of my PhD. The word cloud depicted above highlights some of the keywords related to my research. The cloud has been created using the research paper titles from my list of publications. I have proposed several novel computational models to generate low-dimensional representations shown to be useful in information retrieval, artificial intelligence, and natural language processing. For example, I have proposed new vector space embedding models and have published them in premier natural language processing, information retrieval and artificial intelligence conferences. I have proposed and published several novel probabilistic topic models in top-tier information retrieval conferences and journals. Overall as a researcher, I have published in several highly selective conferences and journals, such as ACM International Conference on Information and Knowledge Management (CIKM), International ACM SIGIR Conference on Research and Development in Information Retrieval (SIGIR), European Conference on Information Retrieval (ECIR), Transactions on Information Systems (TOIS), International Conference on Computational Linguistics (COLING), European Conference on Artificial Intelligence (ECAI), AAAI Conference on Artificial Intelligence (AAAI), Information Retrieval Journal (IRJ), among others. I am also passionate about proposing novel methods in machine learning where two or more machine learning paradigms are combined as a single model.

Two of my works have won the best paper award in competitive venues, one of which was in the Beijing-Hong Kong International Doctoral Forum (2011), where my paper proposed the idea of modelling documents as a terrain to compute readability (something that Super Mario does). I also bagged the best paper award for my paper on ThinkSearch algorithm in a national technical festival held every year in India. My work was featured on the front page of the Indian national newspaper. One of my works was rated as an Area Chair Favourite in COLING.

My main passion is to propose new mathematical models that pose strong computational challenges. To this end, I propose methods that are scalable and novel. I am passionate about both theoretical and applied machine learning which is evident from my works that propose novel mathematical models followed by a wide range of empirical analysis on different tasks. Some of the findings during my PhD were used to design a conference analytics framework for the speech community.

Among various others, I am also currently exploring research topics in the following areas. Please feel free to discuss further if you are interested either in research collaboration or pursuing your research with me.

1. Character Assassinations on the Internet: Something that we notice almost every day on the social media and elsewhere on the Internet is character assassination targeted at individuals or groups of individuals. The propagation of character assassination begins with fake or paid news channels, tweets, blogs, Facebook posts, or via online videos on websites like YouTube and elsewhere, among others. Facebook has decided to introduce a tool to detect such an issue online, which suggests that the problem is critical and timely. The same problem is applicable to web search engines too. Researchers have tried to address closely related problems in the past such as rumour detection, propaganda, among others, but their attempts have been relatively limited and addressed a smaller problem domain whereas character assassinations happen on a much larger scale. My goal is to propose new probabilistic and/or vector space models to meet these challenges on a larger scale. Data would come from blogs, videos with the text description, photo sharing sites with textual tags and content (generally done by sharing morphed photos), etc. I intend to go beyond the traditional text modelling and incorporate information from other sources (heterogeneous) too, such as the link structure of the web which would help significantly advance the field. Some news articles where people have been potentially affected. 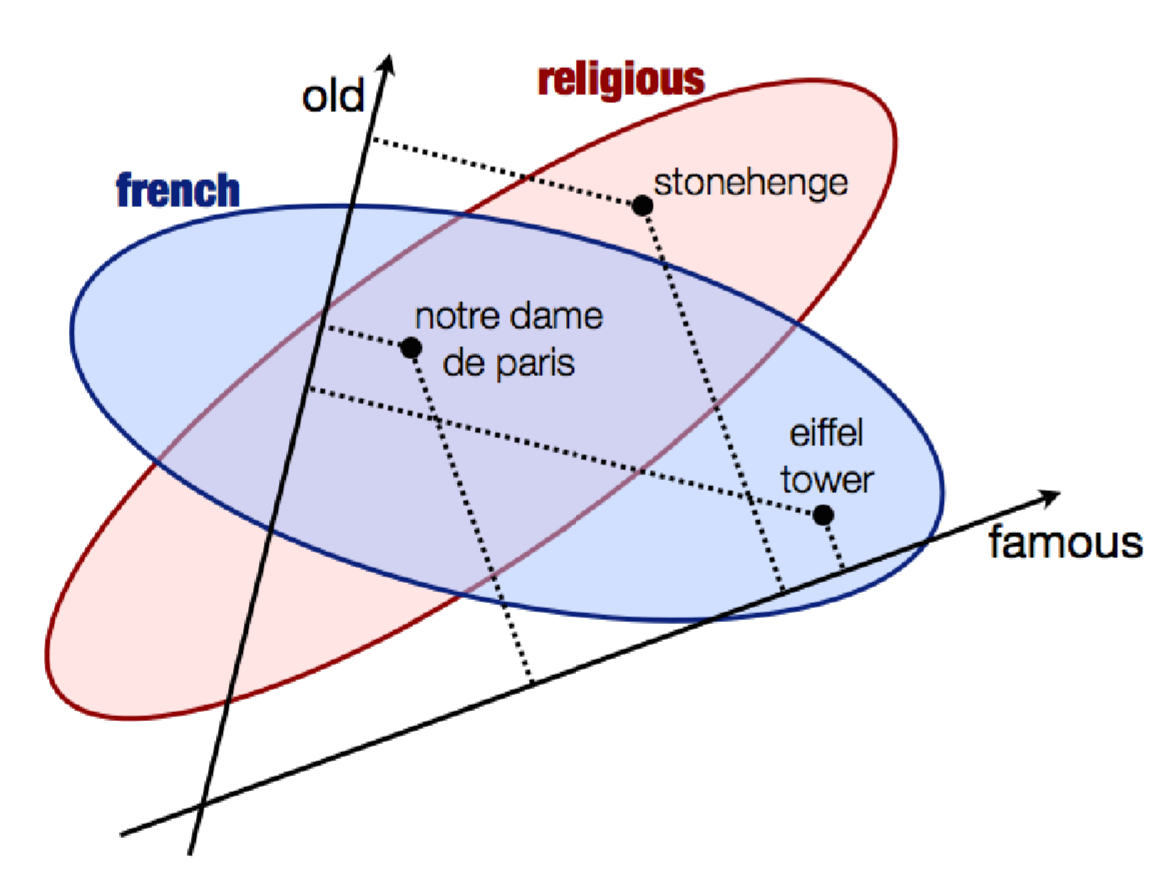 2. Ordinal conceptual spaces for Information Retrieval: Most existing low-dimensional vector spaces, which are mainly trained by optimising similarity, have proven to be useful in Information Retrieval (IR), but the recently proposed conceptual vector spaces (by me) have not been thoroughly investigated in ad-hoc IR on a large-scale. In particular, the proposal will explore novel ordinal conceptual spaces which have shown promising results recently in an entity retrieval task, but relies upon a controlled vocabulary and a knowledge-base which significantly restricts its widespread application. Raw text is often noisy and may not give faithful co-occurrence data. To this end, the role of the web tables dataset would be investigated and how it could be used as side-information. To effectively and efficiently realise the project, novel computational methods to jointly model ordinal representations with an IR framework on a large-scale would be proposed. The joint learning machinery would take advantage of the complementary strengths of both frameworks thereby reducing error propagation.

3. Exploring Urban Lifestyle Patterns: The goal is to recommend or retrieve interesting and relevant points-of-interest to a user or a group of users using urban patterns (extension of my work with MSRA). A noticeable difference from the traditional recommendation algorithms is that I intend to recommend points-of-interest based on the urban lifestyle patterns discovered using graphical models. In addition, novel unified models (combining two or more machine learning paradigms into one) for urban human lifestyle generation and recommendation would be proposed to further improve upon the results. Subsequently, I will explore recommendation based on the demand estimation model jointly trained with a graphical model. To this end, the recommendation model would predict an optimal choice despite the choice may slightly deviate from the ideal or in other words, recommend an item that would give the best return to an individual satisfying a particular desired criteria.

Some useful information for prospective applicants: